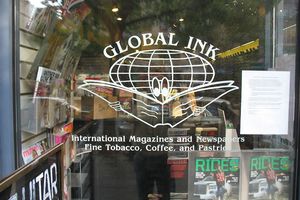 Global Ink as it once was

Global Ink was a truly wonderful newsagent that sold papers and magazines from around the world[1][2], and offered treats like free coffee to sweeten the deal.

One of New York's last independent storefront newsstands, it was defended by loyal Morningside Heights residents when a Universal News briefly alighted on Broadway in the early 2000s[3]. The locals simply refused to patronize the chain store altogether.

It received a mention in Cheryl Mendelson's—wife of Edward Mendelson—2005 novel, Morningside Heights: A Novel[4].

In 2007, however, Global Ink suddenly closed. The newsstand's owners opened a shoe store, Shoe Tree, in its place[5].

One Bwog commenter bemoaned, "where are the hipsters gonna get their n+1s/believers/other such magazines? global ink definitely had the best selection within a short distance" [6].