From WikiCU
(Redirected from Graduation)
Jump to: navigation, search 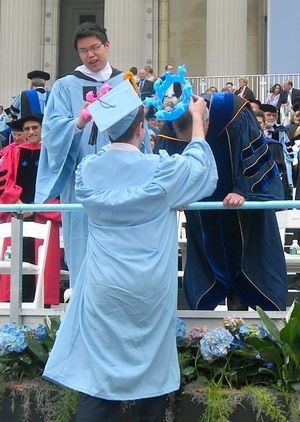 Deantini is spontaneously crowned at Commencement 2013 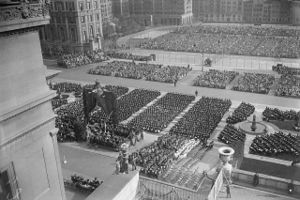 Commencement in the old days 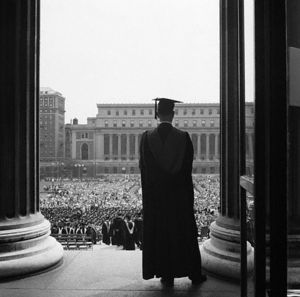 Commencement in the old days, again 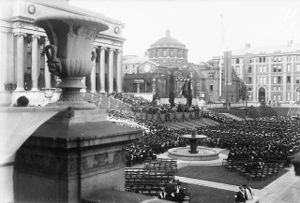 The bitter end, the big sleep, it all ends in tears (assuming you haven't already joined the illustrious ranks of Columbia dropouts)... Commencement is a catch-all term for various ceremonies at which degrees are conferred, names are read, and proud parents get to take pictures. Also known as graduation.

The multi-day celebration of Commencement has been known to create much annoyance and consternation among parents and other attendees. When his daughter Meghan graduated in 2007, John McCain demanded to know “how many fucking times do I have to go to fucking New York this week? How many fucking times can you fucking graduate from fucking Columbia?”

Commencement Week consists of a series of events, usually (but not always, depending on school) in this order:

While the schools and degree programs hold their own recognition ceremonies throughout the week, University Commencement is the official day of graduation for all Columbia students, as it's when degrees are officially conferred (even if you get the actual diplomas on a different day of the week).

The first commencement exercises were held in 1758, which would make the 2009 Commencement the 252nd. However the University likes to "count" the exercises that weren't held from 1755-1757 (no one graduated until 4 years after the school opened, duh). Nor do they count the fact that no one graduated between 1778, when King's College closed as a result of the Revolutionary War, and 1787, when DeWitt Clinton became Columbia College's first graduate (and transfer student). So we're up to 255 for some reason.

In 1931, at the very least, every single graduate's name was published in the New York Times.[1]

For more about the history of Columbia commencements, see the individual pages for each commencement event.