From WikiCU
(Redirected from Greene)
Jump to: navigation, search 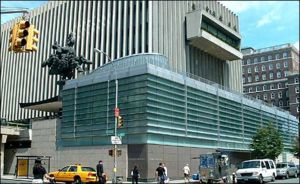 Jerome Greene Hall (sometimes referred to simply as Greene) is the primary home of Columbia Law School and is one of a number of buildings put up in succession by Columbia in the 1960s. It is named after wealthy alumnus Jerome L. Greene. Often criticized as being ugly by outsiders, some law students, perhaps suffering from architectural stockholm syndrome, have been known to develop a certain fondness for it. Other law students agree with critics and find it to be plain ugly.

In the 1960s, Columbia was expanding the size and resources of its graduate professional schools. Among these, the law school, squeezed into the elegant but cramped Kent Hall, required a new home. Hence Greene, along with Uris Hall for the Business School, Mudd for the Engineering School, and IAB for SIPA, was built with donor money solicited by the deans of the respective schools around this time. It has been argued that the primary aims of each dean and donor was to build the most cost-efficient and practical building for the school- and therefore aesthetics weren't really all that important.

The building was designed by GSAPP alum Max Abramovitz of the firm Harrison and Abramovitz, better known for their work on Lincoln Center. The window boxes on the two narrow ends of the building, often described as being fit for a Mussolini-esque dictator to salute the masses, have earned the building its nickname of "the toaster." The building opened in the fall of 1961, and a mural recognizing donors for the building is on the western wall of the main lobby.

The building's western facade is graced by Jacques Lipschitz's sculpture Bellerophon Taming Pegasus, donated in 1977. The sculpture is said to represent the experience CLS 1Ls endure.

In the late 1990s the Jerome Greene underwent a major renovation, resulting the construction of the new entrance, lounges, and cafeteria, Lenfest Cafe, in an addition fronting on the intersection of 116th and Amsterdam designed by James Stewart Polshek. This was followed by gut renovations of the building's classrooms and offices, and the installation of the infamous "Skadden Stairs," named for a New York law firm.

Among the renovations was the installation of what must be one of the campus' finest bathrooms, rivaled only by the 19th century marble of Low Library's first level lavatories.