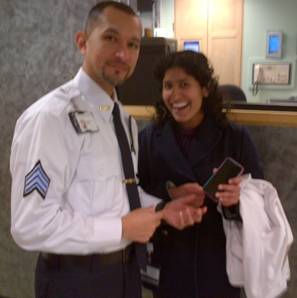 Sometimes the iThief is thwarted: see "[a]nother I-phone recovered thanks to the NYPD / CU Public Safety"

The title of this article, iThief, begins with a capital letter due to the technical limitations of WikiCU.

The iThief, or iBandit, is the person or persons responsible for selectively robbing Columbia students of their iconic Apple products. Thefts of iPhones are more or less a national phenomenon due to the popularity of the device and its high fencibility[1][2]. However, the iThief is a uniquely Columbian character, having gained notoriety in late 2011 by refusing to steal anything other than iPhones. He stopped several muggings, sometimes at gunpoint, upon learning that his potential victims carried cell phones from other companies[3].

The incidents took on additional drama due to Public Safety's clueless characterization of his loot as I-Phones, IPhones, I Phones, and I-phones (but never iPhones, until 2013).

The iThief has left no public clues about whether he is an Apple fanboy or hater. While he may simply have a strong aversion to Android phones, his actions could also be calculated to harm the market share of iOS. His moral code could result from either a craving for iPhones or a perception of Apple users as elitists who deserve to be mugged. His relationship with Segata Sanshiro (a Japanese man who similarly assaults Nintendo fans on behalf of Sega) is unclear.

The iThief was a minor character in the opening scene of V118. He is currently at large.