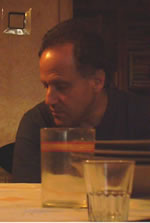 James Robert Russell CC '74 (1953 - ) is a professor of Armenian Studies at Harvard. A distinguished alumnus of Columbia College, he is undoubtedly one of the foremost scholars of Armenian history and culture in the world. Despite this, Russell has been repeatedly denied tenured appointment by Columbia's MEALAC department, probably for political reasons. While at Harvard, Russell has nevertheless fought to introduce a Great Books curriculum, in the model of Columbia's Core.

Russell was born and raised in northern Manhattan and attended Bronx High School of Science. He entered Columbia College in 1971 as a John Jay Scholar, was informed at the close of his freshman year that he was to be a junior the following year, and graduated salutatorian and summa cum laude in the Class of 1974. Part of his salutatory address was delivered in ancient Armenian. During his time at Columbia, he was a student of Professors Nina Garsoian andWm. Theodore de Bary. He delivered, by almost all accounts, a unique salutatory address, where he spoke at length on his research into Armenian mysticism.

Following his time at Columbia, he obtained a B.Litt. (the equivalent of an MA) at Oxford on the Kellett Fellowship, and his PhD at the School of Oriental and African Studies at the University of London in 1982.

Nobody knows how many languages Russell knows. When questioned himself, Russell claims it is not important and he doesn't keep track. Most people estimate at least 20. People have verified his fluency and literacy in English, Mandarin Chinese, Persian, Russian and several other Slavic languages, Hebrew, several Armenian dialects, Turkish, and Greek (both ancient and modern).

Russell's range of knowledge is so extensive and, in some cases, obscure, that Adam Wheeler, a huckster famous for lying his way in, and through Harvard, copied several of Russell's conference talk topics onto his famously outrageous fabricated resume.

Russell joined the Columbia faculty shortly after earning his PhD, teaching Armenian language and culture as well as ancient Iranian languages in the MEALAC department. His passion, however, was teaching undergraduates in the Core Curriculum, especially Lit Hum. He is noted for inviting students up to his apartment near Fort Tyron Park, where he would cook, entertain, and discuss every topic at hand. Russell's Lit Hum sections quickly became some of the most highly-sought-after courses at Columbia College in the 1980s.

Denial of Tenure by MEALAC

Russell was denied tenure in 1992, a decision he attributes to the steadily politicizing MEALAC department. During a 1992-93 stint as a Visiting Professor at the Hebrew University of Jerusalem, Russell was offered the Mashtots Chair in Armenian Studies at Harvard in 1993, the oldest and most prestigious Armenian professorship in the country.

While at Harvard, Russell brought Lit Hum with him [1]. He taught a two-semester freshman seminar course titled, literally, "Literature Humanities", that lays out in its syllabus that it is a direct adaptation of its Columbia counterpart[2]. The course was, by far, the most highly-sought after freshman seminar on offer at Harvard, and over 100 students each semester competed for 15 spots, and Russell insisted on interviewing every single one of them in person.

Russell received support from former President Lawrence Summers in his attempt to introduce a Great Books curriculum, but faced fierce resistance from the rest of the faculty. While Summers was an enthusiastic and approving adherent of Russell's ideas of reforming undergraduate education as a whole at Harvard College along these lines, his departure leaves many of these plans and endeavours in doubt.

Attempts to Return to Columbia

Russell has long wished to rejoin the academic community at Columbia. New York is his home, and his partner of twenty-five years lives in Manhattan. Moreover, he vastly prefers the intellectual environment provided by Columbia College's Core Curriculum to its rather sterile and inadequate counterpart at Harvard.

The Armenian chair which Russell occupied until his tenure denial in 1992 has been vacant for the last fifteen years, filled with one-year lectureships and visiting professorships. When the last visiting professor was not recommended for advancement in 2001, a search committee convened to locate a replacement on a permanent basis.

Russell applied for the position in 2003, and wrote at length of his experience[3]. The person who the MEALAC search committee finally recommended was someone who had been refused tenure several years earlier, and was again rejected by the faculty as a whole. Russell suggests that his ethnicity, his political beliefs, and the politicization of MEALAC prevented a fair consideration of his qualifications. There is merit to his claim in that the MEALAC search committee was unable to find any other qualified candidate who even remotely knew Armenian history, language, or culture and the post continued to be filled on an interim and temporary basis.

In 2006, the search committee reconvened to another attempt to find a permanent occupant for the Armenian chair. Russell again applied, and was again rejected. Unlike in 2003, he was not even invited to deliver a job talk. The final recommendation of the search committee was to offer the post to one of Russell's former students, a historian of late Medieval Anatolia. She declined the post after considering the way the search was conducted and her own background and qualifications[4]. The chair is currently held by a junior scholar of modern Armenian literature who has not yet completed her PhD.

It is difficult to consider the fairness of the search processes from an outsider's and unbiased perspective. However, it is undeniable that Russell's scholarly and teaching qualifications and committment to Columbia cannot be at fault - he imported, wholesale, an exact copy of Lit Hum to teach at Harvard in the face of widespread faculty opposition, he was one of the most sought-after teachers of Lit Hum during his time here, and almost immediately after he was denied tenure at Columbia, he was offered an even more prestigious chair at Harvard. It is also undeniable that the MEALAC department has struggled to find someone to fill the chair - 15 years of failure notwithstanding - due to the sheer obscurity of the field and the difficulty of finding a scholar with expertise on such a subject. Whether these considerations were outweighed (or even weighed at all) against Russell's political beliefs is a subject known only to MEALAC and the search committee.