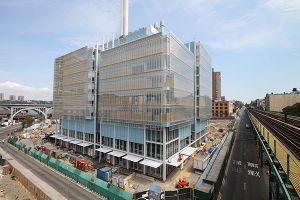 The building as seen from the 1

The Jerome L. Greene Science Center is a research and teaching facility that serves as the home for the Zuckerman Mind, Brain and Behavior Institute, led by neurobiologist Dr. Thomas Jessell, and Nobel laureates Dr. Richard Axel and Dr. Eric Kandel.

The building was designed by Renzo Piano as part of his master design for the Manhattanville campus. Skidmore, Owings, and Merrill also had input on the design. Planning for the center began in 2003, site work began in 2008, and the building was completed in 2017. It was the first new structure built in the Manhattanville campus, and was funded by a $200 million gift from the Jerome Greene Foundation, the largest gift in Columbia history at the time.[1][2] In 2012, publisher and real estate developer Mortimer Zuckerman pledged $200 million to endow the Institute that resides within the Center.[3]