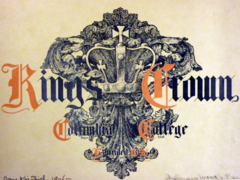 King's Crown (sometimes Kings Crown or the Crown) was a student organization founded in the fall of 1898. They held their initial meeting on December 1 of that year. At the end of 1913 the organization was reformed as the official umbrella management group for non-athletic activities. It was then abolished at the end of spring 1934 and reformed as King's Crown Activities, the administrative precursor to SDA. It was probably rechristened the Office of Student Activities sometime between the 1966-1967 and 1970-1971 academic years.[1] Beneath the Deans in charge was a joint student-faculty-administrator-alumni King's Crown Advisory Committee (sometimes called the King's Crown Advisory Council or King's Crown Activities Council). The Committee/Council divvied up funds and gave out awards like the King’s Crown Leadership Awards.

The organization began as a literary society but quickly morphed into a general social club for students, becoming a forerunner of the Campus Life Committee, planning social and school spirit events, and even the Varsity Show for a period of time. The group eventually became the governing body of all non-athletic activities on campus.

In February of 1903 the organization began considering a scheme to recognize student participation in non-athletic activities. [2][3] The plan finally came to fruition in September 1904 when a group of students were awarded miniature gold crowns in the fashion of watch-fobs.[4]. Awards were made in May for the 1904-1905 year. Eventually the council began making Gold/Silver/Bronze awards. The tradition has continued to this day and is now overseen by SDA, where it is known as the King’s Crown Leadership Awards.

In later years Huger Elliott's rendition of the crown began appearing by itself in place of the full logo that Elliott designed.

A book plate designed by Elliott for Kings Crown

No later than 1900, Huger Elliott (School of Architecture 1899) executed a logo design for the Crown that prominently featured the eponymous crown. While not a completely faithful reproduction of the actual King's Crown of College Hall, the design is arguably the forefather of all Crown's being used as symbols of the school. In 1906 the class of 1881 donated a flagstaff for a flag bearing the crown logo of the King's Crown organization. What would become what we now know as the Columbia College Crown debuted in 1910 on the cover of Columbia Alumni News, beginning as a sketch during the spring of 1910, and becoming the familiar graphic design by the fall.