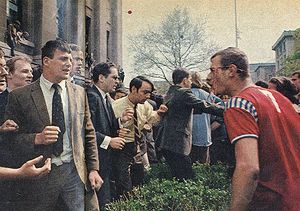 The Majority Coalition was a group of students who opposed the 1968 protests. It was primarily composed of relatively conservative students and athletes.

The more active members of this group chose to directly - and aggressively - confront the protesters. They attempted to retake Fayerweather from occupiers, and later ringed occupied buildings such as Low Library and attempted to block food from being catapulted inside.

The majority in the Majority Coalition, however, chose not to take part in the melee altogether, and merely signed petitions against the more radical students' actions.