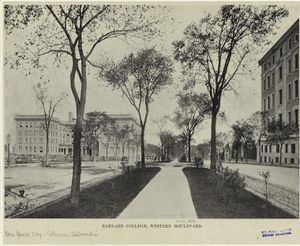 Milbank viewed from "Western Boulevard" (Broadway) in 1899, with Havemeyer at the right

Milbank Hall is the oldest building on the Barnard College campus. It is also the northernmost building on the site, bordering 120th Street at its rear. It stretches the entire (narrow) width of the campus as well, from Broadway to Claremont Avenue. The small courtyard garden formed by its wings is one of the few green spaces on Barnard's small and intensely developed campus.

The term "Milbank Hall" is actually a blanket expression for the building, whose three wings each have their own names: Milbank Hall proper, Brinckerhoff Hall, and Fiske Hall.

It currently houses the French, Italian, Slavic languages, German, Sociology, and Psychology departments. It also houses the Toddler Center, a program for students interested in learning about early childhood development (families bring their adorable babies for observation. Sarah Jessica Parker used to bring her twins there.)