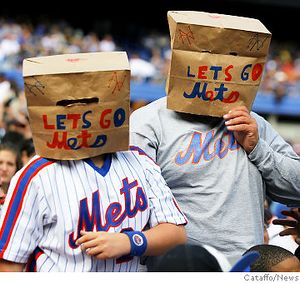 You can't really blame them.

The New York Mets (also known as The Metropolitans and The Amazins') are a Major League baseball team that plays in the East division of the National League. They play at Citi Field, a collection of (largely empty) bleachers constructed in the middle of the concrete wasteland called Flushing Meadow in Queens. Putatively located inside a park, it's across the street from a collection of chop shops referred to as the "Iron Triangle." The Mets are known for their beloved mascot, Mr. Met, setting the (still standing) record for futility (i.e. most losses in a season) in their inaugural season in 1962, their "Miracle" 1969 World Series championship, relief pitcher Tug McGraw's 1973 mantra "Ya Gotta Believe", and benefiting from arguably the most famous error in World Series history. More recently, they've become known for spectacular failures at the end of the 2007 and 2008 seasons.

Mets TV play-by-play announcer Gary Cohen is a Columbia College alumnus, having begun his broadcasting career at WKCR, where he called soccer games with George Stephanopoulos. Before this causes you to jump onto the Mets bandwagon, don't forget that his color commentator, Ron Darling, is a member of the Axis of Evil. Lest you think that the Mets broadcasting team is just an Ivy League social club, Keith Hernandez, Darling's co-commentator and fellow member of 1986 World Series winning Mets team, did not attend an Ivy League school. But that's OK; he's Keith Hernandez. Gary, Keith, and Ron are considered to be among the best announcing teams in all of baseball.[1][2] Which is a good thing, since it's not like the product on the field is particularly entertaining these days.

Mets fans tend to be simultaneously optimistic, fatalistic, and perpetually anguished. In other words, they tend to be like Columbia students. You can follow them here: Amazin' Avenue