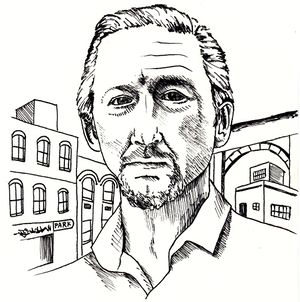 Sprayregen, drawn for The Blue and White by Maddy Kloss

Nick Sprayregen was a prominent Manhattan business who owned Tuck-It-Away Storage. Tuck-It-Away had a location in the Manhattanville, along with scores of other properties in and around NYC.

Tuck-It-Away's location on the planned land for Columbia's Manhattanville Campus would catapult Sprayregen into the public eye, as he was one of three parties that refused to sell to his land to the university. Ironically, the very land that Tuck-It-Away was situated on had been owned by the university just 25 years ago, who may have sold the land in the string of financial troubles the university ran into in the early 1980s.

Although he lived on the Upper East Side, Columbia's Manhattanville expansion seems to have transformed him into an outspoken and generous member of the community. He was a vocal advocate against the expansion of the university into the area. Likely riding the concerns about the gentification of places like nearby Central Harlem throughout the Early to Mid 2000s, Sprayregen sounded the alarm on the possible mass-displacement of local residents.

The university remained in negotion with Sprayregen for years, but likely felt a degree of financial and faculty pressure to break ground on the new campus, and was simply unwilling to continue talks with Sprayregen. Working with the powers vested in the state and city goverment in the supreme court ruling Kelo vs. New London, Columbia worked to seize Sprayregen's property through eminent domain. This usage of eminent domain to transfer property from private owners to other private owners was extraordinarily controversial, and was one of the points of protest in the 2007 hunger strike, as well as the continued work of MAD.

After fighting Columbia in court for years, Tuck-It-Away could recognize the end was near. The Manhattanville location would wage an anti-Columbia campaign, plastering a billboard reading "Dear Columbia: No Forced Displacement" on its Riverside Drive-facing wall, with the intention of exacerbating the already contentious relationship between the expanding university and nearby residents.

Sprayregen was noticably quieter after his $34 Million settlement with the university.