Tents set up on South Lawn for the hunger strikers 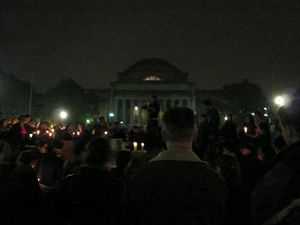 Strike supporters rally at The Sundial 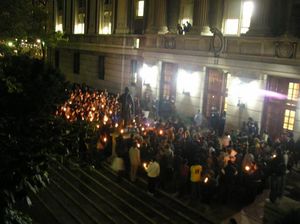 Strike supporters march on an administrative meeting in Hamilton Hall

In November 2007, Columbia activists embarked upon yet another protest. Banking off several recent "bias incidents" involving racist graffiti and symbols seen around campus, a group of students went on a hunger strike, and lassoed some vague and general demands into an agenda they hoped they would coerce the administration into accepting. Students dropped in and out of the strike, but the plurality went without food for 10 days.

On November 14, the administration met some demands it was planning to address anyway. Two days later, the hunger portion of the protest ended. Despite vows the protest would continue, the hunger strikers ended their campout on South Lawn a day later.

"We demand:
1. Columbia withdraw its 197-C proposal to rezone Manhattanville immediately.
2. After withdrawing its proposal from the review process, Columbia submit its proposal to Community Board 9 for revision in line with the principles of the 197-a plan.
3. After making the relevant changes to its rezoning plan, Columbia negotiate a substantive community benefits agreement which serves to mitigate displacement created by the university’s presence and addresses job creation, environmental problems and university-community relations"

Lucha, the MSA, Take Back the Night, the College Democrats, SEEJ, the BSO, BOSS, SOL, Delta Sigma Theta, and the ISO were among student groups offering support. The CCSC, GSSC, and Barnard's SGA offered "statements of solidarity".

The strikers were also supported by some members of the faculty, notably Hamid Dabashi, Gil Anidjar, Nicholas De Genova, and Barnard PoliSci prof Dennis Dalton, who actually joined the strike. The entire faculty of the Center for the Study of Ethnicity and Race has also declared support.

An informal anti-strike group was organized on Facebook by Aga Sablinska and held counter-protests.[2] At its peak, the group had over 720 Columbia-affiliated members.

The ESC was the only student group to officially oppose the strike. A Spec poll found that 64% of the student body did not support the strike and that 73% thought that the administration negotiating with them would set a bad precedent.

Anti-Manhattanville expansion Community Board 9 believed the methods employed by the strikers were unnecessary and counterproductive.

In a published report in Spec on November 15, Dean of Student Affairs Chris Colombo reportedly told CCSC President Michelle Diamond that the strike "is going to end one way or another tonight". Diamond subsequently issued a statement of her own, independent of the student government, asking for the strike to end. That day, the university prompted two strikers to drop out after threatening forced medical leave.

Columbia College dean Austin Quigley and Arts and Sciences VP Nicholas Dirks tried to preempt the strike with announcements they were willing to make new administrative hires to represent diversity concerns, and pledged further study regarding the status of the Core Curriculum. The Manhattanville expansion was never really on the table.

On November 14, Spec reported that the strikers had won the inclusion of a Major Cultures seminar to become part of the Core Curriculum, transforming the existing Major Cultures distribution requirement. Later, the univesity seemed to suggest that reform of Major Cultures would simply involve various departments' "submission of new syllabi". Either way, this will require a $50 million fundraising project. Among the other major goals the administration agreed to was mandatory anti-oppression training for incoming faculty.