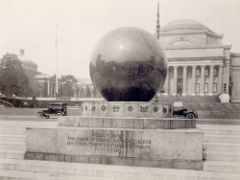 The Sundial before the sphere cracked and was removed in 1946.

The Sundial is a fixture of campus geography, located at the center of College Walk at the opposite end of Butler Plaza from Butler Library. The sundial is a campus landmark and a popular site for readings, speeches, advocacy, and meeting up.

Though only the base remains today, originally a giant granite sphere sat on the base and indicated the date of the year by the shadow it cast on the base. The sphere developed a crack in 1946 and was removed. It eventually disappeared from storage and recently turned up in Michigan. Efforts to return it to campus have failed.

The brass inserts on the base were designed by William Ordway Partridge CC 1885, and represent a cycle of a day: Torches of the Morning; Increase of the Dawn; Chanticleer; Sun Rise; Love Awakening; Boiling the Pot; Love Crowning the Hours; Love at Play; Love Tempers the Night Wind; The Evening Star; Love Piping to the Moon; and Voices of the Night.

The plot of the 113th Varsity Show centered around the missing sundial ball. In the musical, the sphere was stolen in 1946, and is returned at the end of Act 1.

As it were, The Sundial is not the only sundial on campus. There is an actual working sundial located outdoors between Pupin Laboratories and CEPSR.[1]