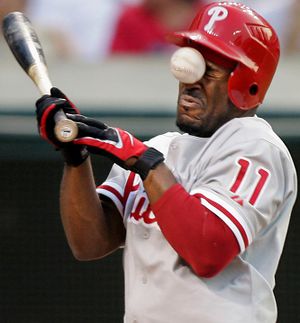 A day in the life of a Philly, whatever the hell a "Philly" is.

The Philadelphia Phillies are a Major League baseball team based in Philadelphia, Pennsylvania. The Phillies did in 2008 what the Mets and the Yanks could not do that year: win a World Series. The event triggered an enormous citywide riot in which cars were overturned, impromptu ritualistic bonfires were lit, and men were sniped off traffic lights with whiskey bottles. Fans had a right to celebrate, I suppose; the Phillies are one of the losingest teams in MLB history, having lost their 10,000th game on 15 July, 2007.[1]

At the present moment, many a Columbia student can be seen wearing Philly 2008 World Champions merchandise. The fact that practically no one was wearing Philly merchandise in 2007 shows that most Phillies fans are bandwagoners.

The Phillies got pwned by the Yankees in the 2009 World Series. One should expect the loss to be attended by the disappearance of Phillies merchandise on campus.