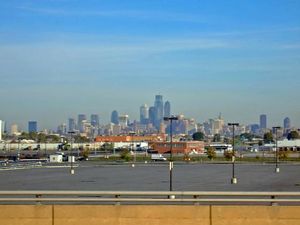 Philadelphia is a city approximately 90 miles southwest of New York City. It is so close to New York, in fact, that virtually none of the state of New Jersey between the two cities remains undeveloped. Hipsters who can't afford Brooklyn have even begun commuting from Philly, and its nickname has been modified to account for this reduction to suburban vassalage: from "city of brotherly love" to "the sixth borough".

Like Boston, Philadelphia's best days are behind it. Founded by William Penn in 1680, it is one of the oldest cities in the country. Penn planned Philadelphia so that the streets would run either north-south or east-west, creating a grid system that would be easy to navigate (unlike most European cities, in which the streets just jut out every which way and it's impossible to find anything). This idea was later adopted by New York City as it stretched across Manhattan into what is now Midtown.

Philadelphia was also the birthplace of the Declaration of Independence and the Constitution, a fact which has been endlessly fetishized by turning half of the city center into a colonial theme park. Don't let a Philadelphian make you believe the city was the country's first capital, though: the official designation belongs to New York.

Geography and things to do and see, if you must

Though Philadelphia has a high murder rate and is home to UPenn, limited parts of it are fairly nice. Just stay downtown and don't go East, North, or West (you might get shot). Also, don't even think about going underground and trying to experience the city's disturbing excuse for a subway. Go to South Philly for cheesesteaks and Italian food or to see the World Champion Philadelphia Phillies beat up on some crappy team like the Mets.