From WikiCU
(Redirected from ROTC)
Jump to: navigation, search 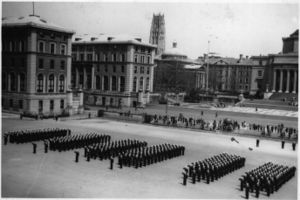 Reserve Officers' Training Corps (ROTC) is a college-based, military officer commissioning program. It is designed as a college elective that focuses on leadership development, problem solving, strategic planning, and professional ethics. The organization has been banned from Columbia's campus since 1969.

In 1969, a faculty-student commission chaired by Harvey C. Mansfield, Sr. made a number of recommendations that, while it did not amount to a de jure ban, nevertheless created conditions that made the Navy unwilling to continue to sponsor the unit. Conditions included the denial of academic credit for military science and military history courses, the refusal of Columbia to make space and facilities available for ROTC cadets, and the denial of academic titles for ROTC instructors.[1] The Navy then withdrew from Columbia.

In 1976, a special task force chaired by SEAS Professor John Tien made recommendations that further affirmed the conclusions of the 1969 Mansfield Commission, and added the stipulation that any decisions about the future of ROTC at Columbia had to be undertaken by the University Senate.

ROTC continues to be available to Columbia students through cross-town programs at Fordham University (Army) and Manhattan College (Air Force). Columbia students are technically able to participate in Navy ROTC programs at SUNY Maritime, but the location is so far as to make it impractical.

Many of these technical changes have been rolled back in recent years. Space and facilities are now made available for ROTC cadets to participate in weekly color guard flag-raising and flag-lowering ceremonies, as well as annual commissioning ceremonies. However, as Columbia does not formally participate in ROTC, academic credit and ROTC faculty are still not permitted.

Student Affairs maintains a website with information on these programs.

Several attempts have been made to restore ROTC to campus. University Senate votes in the 1970s and mid-2000s both rejected such a move. A 2008 student survey on the issue, conducted to guide a discussion and perhaps a renewed vote in the Senate, appeared to have resulted in a narrow rejection for ROTC restoration once again. The results of the survey remain controversial because concerns about voter fraud led almost one third of all votes to be thrown out.

A new process was run in the spring 2011 semester by the University Senate's Task Force on Military Engagement succeeded in a resolution endorsing senior administration to begin negotiations on the return of ROTC.

On May 26, 2011, President Bollinger signed an agreement onboard the USS Iwo Jima with Naval Secretary Ray Mabus officially allowing the return of a Naval ROTC program to campus.[2] The agreement allows the Navy to move into space on campus and would allow students to enroll in a NROTC program that would take place elsewhere in the city.

This issue in particular has proved to be the sticking point at Columbia. Irrespective of the merits of the program, the university has a stated policy requiring all groups to accept members of any sexual orientation. ROTC does not.

The imminent repeal of DADT may finally put arguments that oppose ROTC on these grounds to rest, though it's unlikely to end opposition to ROTC entirely.