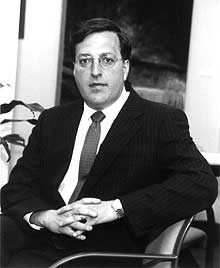 Robert Kasdin was the Senior Executive Vice President of Columbia University. This was one of several new Executive Vice Presidents created by PrezBo for doing something Columbia should have already been taking care of. Kasdin, along with Susan Feagin, was brought to CU in 2002 from UMich by PrezBo. At Umich, Kasdin was the "executive vice president and chief financial officer." At Columbia, as one senior faculty member put it, his job is to be the "money man who runs the university" hidden in a bunker. In short, he is Bollinger's Dick Cheney. Other administrators fear him, and everyone lower than administration is too distracted by PrezBo and Sachs to pay attention to him.

His official job description was to "[lead] operating departments, financial management, and innovation enterprises at Columbia University." His salary in 2010 was $659,634.

Few students and faculty have seen him, let alone interacted with him. These interactions are rumored to be unpleasant. Some undergraduate students colloquially refer to him as "Bobby K". Apparently he hates this, which in turn continues the use of said moniker. In 2009, CCSC managed to secure an audience with Kasdin, but much like a Congressional hearing, the event wasn't particularly enlightening.[1]

Mr. Kasdin earned his AB from Princeton and his JD from Harvard Law School.

In 2013, he served as co-chair of Scott Stringer's transition team[2]. In May 2015, he announced that he would be leaving Columbia for Johns Hopkins. Anne Sullivan took over many of his responsibilities.