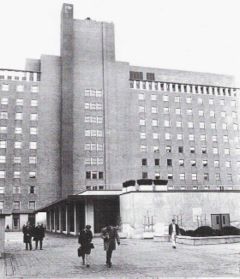 The Seeley W. Mudd Building, affectionately known as Mudd, is arguably one of Columbia's ugliest buildings, and unarguably one of its worst named (appropriate for its ugliness). However, it is fortunately tucked into an inconspicuous corner, unlike Uris. The building is appropriately the headquarters of SEAS. It is filled with prison-like cinder block classrooms.

It was built in 1966 according to a design by Voorhees, Walker, Smith. It would be amazing if they had ever found work afterwards.

Its imposing size and unimaginative brown color earned it the nickname "the brick," to go along with "the toaster" for Jerome Greene Hall. Years later Fairchild was effectively built in front of Mudd, masking most of its facade from the campus side. Whether or not his is an improvement is debatable.

Students are normally able to swipe into Mudd 24-hours a day, including Carleton Lounge at the immediate left of the main entrance on the campus level. A skybridge also connects the building to CEPSR. More importantly, there is an awesome, 360 degree view from the roof, if you can figure out how to get up there. Play safe.

Other campuses have more Mudd Halls. All of them, however, are named after Seeley G. Mudd, a prominent philanthropist and the son of Seeley Wintersmith Mudd, after whom our Mudd Hall is named. Our Mudd Hall appears to be the only Seeley W. Mudd Hall in the entire nation. There are at least a dozen Seeley G. Mudds. We are therefore unique and special.

We will ignore the fact that USC has a Seeley Wintersmith Mudd Memorial Hall of Philosophy.