On Friday, October 16, 2009, the Columbia Spectator website mysteriously went missing. Instead of the natterings of self-important "journalists", visitors received a message containing Spec boilerplate about their organization. Word spread to Bwog that a dissident member of the Managing Board, the rebel Ryan Bubinski, took down the website, in protest of the 2009 Spec leadership and its unwillingness to listen to the grievances of a dissatisfied faction of the Managing Board. 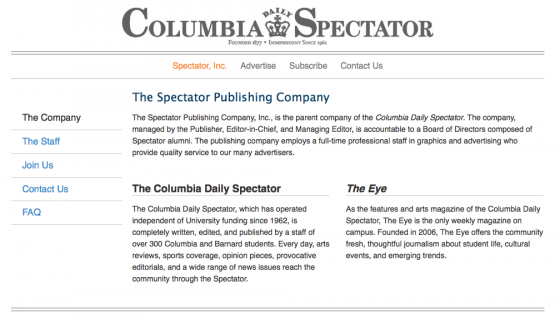 Dear members of the 133 Managing Board,

This has been a trying year for the newspaper, and moral [sic] is low across the staff. Such circumstances require a serious evaluation of the problems facing the publication. As you are most likely aware, a recent proposal to create an MB-wide forum to critically assess the role of existing management positions, to more strictly define position responsibilities, and entertain proposed structural adjustments has been interpreted as a conspiracy against the current Corporate Board, who invoked executive privilege and the threat of dismissal in an attempt to quash all effort to create such a forum. I am insulted by their reaction, and embarrassed to serve under such management. I do not wish for my name or my work to be associated with an organization that does not respect the experience and insight of its staff, punishes innovative thought, and discourages innovation. I hereby resign from my position as Online Editor.

I apologize to those of you who were requesting my services on future projects. I believe the CB's claim to executive privilege on all issues is both unconstitutional according to the legal document of the Spectator Publishing Company and harmful to the publication as a whole, and therefore I refuse to passively accept their claims by not acting on this issue. At the end of the night (more appropriately the beginning of the morning) you put out the paper, not the CB. You are undermining the voice you deserve by not openly acknowledging this fact.

I have removed all personal intellectual property authored by me from the Columbia Spectator webspace; all content produced by others remains. I am willing to restore this property in full should the MB collectively condemn the CB's attempts to claim absolute executive privilege and should the MB achieve a representative voice in the structure of the 134 Corporate and Managing Boards (a privilege the CB claims exists solely with the Turkeyshoot Board, in direct contradiction to Article 12, Section 2 of the constitution). I will consider these objectives accomplished and will return my property in full if the CB signs a formal, and public declaration of intent to:

- Work with the MB to draft and ratify an operable Constitution

- Work with the MB to reevaluate the Turkeyshoot process, and accept whatever clearly defined process two-thirds of the MB votes to institute

- In all interactions with the MB, operate in the spirit of the existing constitution, which does not give the CB complete control over the operations of the organization, but instead treats two-thirds of the MB as the executive authority

I stand firm with my principles, to the point where I will gladly forget my body of work for this publication ever existed. There is no longer an "online component," to anything.

Lawyers got involved. The Spec had no internet presence. Speculation abounded in Bwog threads.

Stuff about the legality of Ryan's actions and criticism of Spec management. Thankfully, Google cache exists.