From WikiCU
(Redirected from Superintendent's House)
Jump to: navigation, search 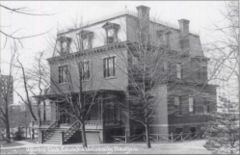 An old black and white photograph of the Superintendent's House 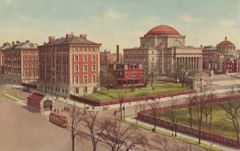 Superintendent's House, visible between Lewisohn and Low Library in a postcard

The Faculty Club was a building located roughly where Dodge Hall stands today. It was originally part of the Bloomingdale Insane Asylum where it served as the Superintendent's house until Columbia moved in. It served as home to the Music Department until 1905, and then the Men's Faculty Club when it first met in 1906, until it was demolished in 1922 to make way for Dodge Hall. It was known at varying times as "Old South Hall", the "Men's Faculty Club," and the "Officer's Club."

The three-story building had four dining rooms, a reading room with writing tables and chess tables, and five bedrooms.

When it was demolished, President Butler commissioned the construction of Faculty House to replace it.