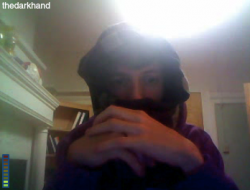 The Dark Hand—or TDH—was the pseudonym of Nicolas Biekert, SEAS ’13, MS '14, on b@b. TDH was second-in-command of specsucks, serving directly underneath the still anonymous, possibly fictitious The Cloaked Mask.

He was anonymous until Bwog hunted him down for some reason, at which point he remarked, "I am internet famous"[1]. Later, he would write an op-ed for Spec, chastising some Bwoggers for—like the Baltimore Sun in The Wire— "spend[ing] months of their time covering an invented and irrelevant criminal instead of news of actual import"[2].

He majored in Applied Physics.