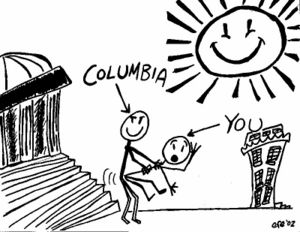 The Columbia Federalist, known informally as the fed, is the major undergraduate humor newspaper. Founded in 1986 by now US Supreme Court Justice Neil Gorsuch as an alternate newspaper The Spectator, The Fed evolved through various iterations before settling on its current humor formate.

The Fed was first founded in 1986, by Neil Gorsuch, Andrew Levy, and P.T. Waters. The paper originally operated under the name 'The Federalist Paper' (which is still the paper's official name on some university documents). The paper boasted itself "a newspaper in the tradition of Columbians Hamilton and Jay" and attempted to be an alternative paper to 'Spec', which the founders viewed as too ideologically biased. In practice, the paper was right-leaning, with some funding received from the Madison Center for Educational Affairs, a conservative think tank. Along with a conservative tone was a concerted effort by the paper's authors to provide ideas that ran against mainstream campus thinking.

In the early 1990s, the paper's two largest financial backers, Coors beer and Kaplan test prep, pulled funding over the paper's increasingly conservative tone. This left the Madison Center, know known as the Institute For Education Affairs, as the sole funding source. In 1992 the new editorial board began moving the paper towards the center, striving to be a more balanced publication in the spirit of the founding ideology. Following this shift, the paper saw growth in readership as it became one of the major news publications of the campus.

The paper has undergone many changes in mission, style, form, and success, though it has experienced relatively few interruptions in production since the publication of its first issues. Currently, it prints mostly oddball humor, satirizing trends, politics, and life at Columbia and elsewhere, as well as occasional investigative pieces and interviews with various famous people.

Among its regular features is "They Watch," which derides social and Columbia-related trends, and oft-controversial cartoons. The newspaper almost died after publishing the infamous Wacky Fun Whitey cartoon.

A party hosted by The Fed in late September in Lerner Party Space.