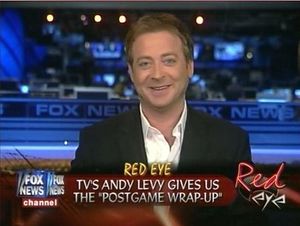 Today, he is "ombudsman" of Fox News's Red Eye with Greg Gutfeld. According to The New York Times, "Mr. Levy was living at his parents’ house on Long Island when he started leaving droll, approving comments on Mr. Gutfeld’s Huffington Post blog. Mr. Gutfeld sent him e-mail and, not long after, asked him to join the show" [1].

Levy's catchphrase is "I apologize for nothing"[2]. He is a veteran of the U.S. Army.