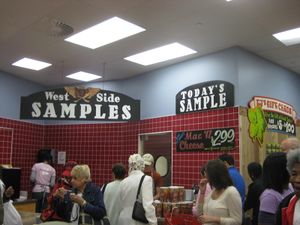 Trader Joe's is a supermarket chain from California. In 2010, a branch opened on the Upper West Side at 72nd and Broadway. In 2019 a second location opened at 93rd and Columbus.

The prices beat Westside and Morton Williams by a great deal, so the subway fare downtown is easily justified. For instance, a six-pack of Yuengling costs $6.50. However, the store's produce is commonly held to be of lower quality than Westside's. The lines can snake around the entire store at peak periods, such as after work on weekdays, but move quickly. And the pirate shtick gets old.

It is a sort of modern University Food Market in that it limits the gouging of students too timid to venture north to Fairway for groceries.