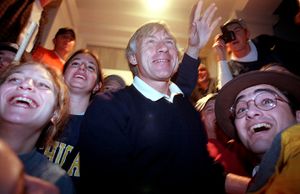 The University of Michigan is Lee Bollinger's former dominion. He liked it so much that he even held student parties in his house.[1]

Thanks to Bollinger and his insistence on making the school a test case for affirmative action, it also has some of the most complex admissions policies in the country.

Like students at other schools sentient enough to recognize their place, Michigan students have an inferiority complex when it comes to Columbia, as past WikiCU vandalism has shown. (This may have to do with the not-minor controversy Bollinger stirred up when he left Michigan right after saying he had no intention to do so.)

The most important thing to know about the University of Michigan is that it hates the Ohio State like Millwall hates West Ham.