Up Late with Jeff Julian 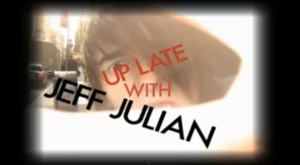 On February 21, 2008, the Jester of Columbia presented Up Late with Jeff Julian, a taping of a fake late night talk show (aired on the fake NBN Network) in the Black Box. The show consisted of scripted dialogue, prerecorded commercials, and celebrity guests. The audience acted as the studio audience viewing both on- and off-air antics.

The show culminated in the on air suicide of Sonny Sinclair and the arrest of Jeff Julian for multiple crimes.

Injuries Suffered on the Show

Multiple injuries were suffered by characters in the show.