The Jester of Columbia, or simply the Jester, is a campus humor magazine. It is widely acclaimed as "somewhat funny every now and then," a major achievement for any college humor publication.

The Jester is also known for its comedic performances, which include the Andy Kaufman-esque Banquet in Honor of the King of Spain, the full multimedia production Up Late with Jeff Julian, the sketch show Finite Jest, and Internship Survival Guide, a collaboration with Project Bluelight. 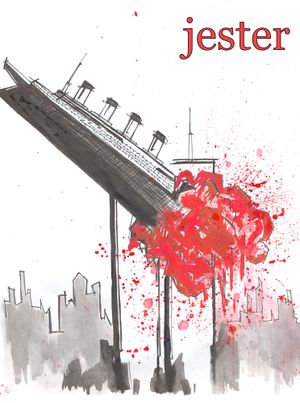 The cover of the May 2008 Tragedy issue

Legendarily founded on April Fool's Day, 1901, Jester is one of the oldest such publications in the US. It was revived in 2001 after a 12-year lapse in publication and again in 2004 after a shorter one.

The magazine has occasionally tested the boundaries of satire severely. 1,500 copies of a 1967 issue that included phrases such as "tar babies" and "the noble savage" were confiscated by black students from around campus, and around 30 of them were burned in front of Ferris Booth Hall in June of that year.[1]

During the 2006-2007 school year, Jester was embroiled in a bizarre (and possibly one-way, i.e., as a Jester-only prank) feud with CUSJ, the Columbia Undergraduate Science Journal.

In May of 2008, the Jester prompted one of those short-lived web-scandals with their "Tragedy" issue, the cover of which featured the Titanic crashing into the Twin Towers[2]. Some bloggers blogged about it; some commenters commented about it[3]. Classic sensitivity/free speech thing.

The Jester has occasionally been known for its artistically sophisticated covers, a trait which reached its peak during the 1930s, when Ad Reinhardt, later a notable abstract expressionist painter, was one of its editors. The cover art of the Jesters of this period was considered comparable to that of The New Yorker.