Columbia.edu is Columbia's domain name and home page. It was notoriously behind the times until a few years ago. Nevertheless, it's still fairly crap.

The domain name was registered on July 5th, 1985, and the first servers for the domain were hooked up in September 1985. The registration is next scheduled to expire on July 31st, 2007. 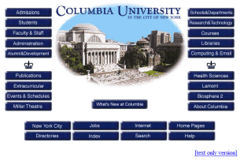