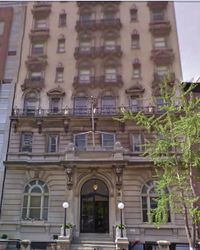 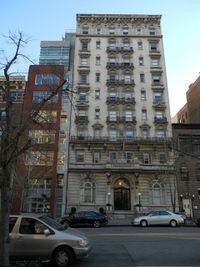 420 West 116th Street, sometimes referred to as King's Crown, is a mostly-law school-affiliated apartment building managed by University Apartment Housing. The building was built in 1909 to a design by Naville & Bagge and is located across from Wien Hall. The ground floor houses Deutsches Haus, which hosts academic, cultural and social events for Columbia's Department of Germanic Languages.

The building consists of furnished and unfurnished studios and one bedroom apartments in a small corridor setting, each equipped with basic kitchen facilities. Common laundry facilities are located in the basement. There is also a single two-bedroom unit on the top (10th) floor.[1]

In 2010, about eight rooms in the building were made available to incoming transfer students in CC and SEAS. Much like 548 W 113th St the year before, it is expected that these spaces might remain part of the undergraduate residence hall system in years to come, due mostly to the increased number of students in Columbia College.

Built in 1909 as a hotel, the building hosted the Hotel Westminster and later the King's Crown Hotel.[2] The building was purchased in the 1970s by the Trustees of Columbia University and transformed into residence units for Law School faculty and students.

Physicist Leó Szilárd and Nobel laureate Enrico Fermi lived in King's Crown Hotel in the late 1930s.[3] Their accidental encounter in the hotel lobby in January 1939 led to "one of the more colorful - and contentious - partnerships in the history of science" and turned out to be of fundamental importance for the success of the Manhattan Project.[4]