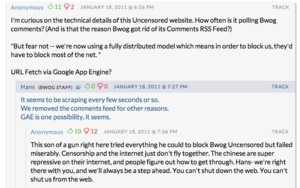 Bwog tech and Bwog Uncensored at it in a comment thread

Bwog Uncensored was a website dedicated to scraping Bwog comment threads and republishing on its website any comments deleted by the Bwog editors. It's owner called it "an online platform that aggregates comments that the editors of well-respected websites have chosen to censor," though said platform only ever aggregated comments from Bwog. Like specsucks, the person(s) behind the site maintained anonymity.

Bwog Uncensored announced its existence on January 18, 2011 in a post about Operation Ivy League court proceedings[1]. Over weeks and months, the Bwog tech team devised ways to prevent the site from scraping comments; Bwog Uncensored subsequently adapted to those changes. And again, and again.

Sometime later, the comment-scraping ceased, and the domain was set to redirect to Spectrum.

On March 5, 2012, Bwog reconsidered its comment policy, prompting an anonymous commenter who claimed to speak for Bwog Uncensored to "declare victory" and announce that the project was over (after it had already ceased aggregating deleted comments) [2].

Bwog Uncensored looked almost exactly like Bwog did in 2011. The site managers claimed they'd done it through a w:clean-room process, i.e. without stealing any of Bwog's own code[3].

On March 3, 2011, the Bwog Uncensored staff sent the following email to many Columbia listservs, including the Bwog and ADi listservs[4]:

If you haven't heard about us yet, BwogUncensored is an online platform that aggregates comments that the editors of well-respected websites have chosen to censor. It's a study on the limits of free speech in the incredible democratic culture that is the internet. We intend to extend this platform all across the internet, but for now, we're focusing on Columbia University's Bwog. So without further ado...

Send this message far and wide: BwogUncensored.com is recruiting! We're looking for technologically-able, socially-savy, level-headed folks familiar with contemporary internet culture to help push BwogUncensored into the next phase. We're going to be expanding into various internet publishing platforms and continuing our research into free speech issues on the internet.

If you're up to the task or know anyone who is, send a resume and some trolling rhetorical banter over to jobs@bwoguncensored.com, and we'll get saddled up, yeee-haw!

Later, they followed up with:

In any case, thanks for all the resumes you've sent our way, and by all means keep them coming! Looks like we're going to have an exciting team, and we still do welcome more members. The summer projects we've discussed are going to be great for the 2011-2012 school year.

The first iteration of this page, as presumably written by the Bwog Uncensored people

Bwog has been great and all, and we all love their comment threads, but their censorship is widely accepted as the second most appalling thing on campus, after Frontiers of Science. Bwog Uncensored was started as a way for the silenced voices of our beloved trolls to be heard once again. It is a project to stop the tyranny of Eliza Shapiro. Its creators remain anonymous, but it is widely believed there is a sort of newfangled academic backing behind it. Rumors point to behavioral studies.[5]