To join the club, see our mailing list information below. There, you will hear about our weekly trips to MPHC and all comps, outdoor trips, and other events we have.

As with all club sports, membership in the Rock Climbing Club is available only to those Columbia students and affiliates with access to Dodge Fitness Center.

The Columbia University Rock Climbing Club was formed in the spring semester of 2003 by friends, Stephen Wang, SEAS '06, and Mark Backman, SEAS '05. The club originally grew out of an email list maintained by the Hiking Club, and later, communities on social networking sites like CampusNetwork and Facebook. The club attracted campus-wide interest, collecting over a hundred signatures in its first outing during the Fall 2005 Activities fair. The climbing club forever holds a debt of gratitude to the Brazillian Ju Jitsu club and Chris Sweetgall for sharing their activities fair table with the then nascent and unrecognized rock climbing club. Armed with half a table, a poster board from Ivy League Stationers, and a black marker, history was made.

Following a series of meetings with Director of Intramural and Club Sports, Brian Jines and Associate Athletics Director, Ken Torrey, Mark and Stephen were given the green light to proceed with the club. During the Spring 2006 semester, the club gained recognition from the Club Sports Governing Board. The club was placed on a one semester evaluation during which no funding was provided and was subsequently awarded full status and funding in the Fall 2007 semester. 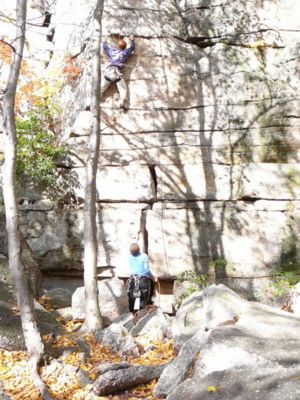 Ethan Coon and Christa Brelsford out on the rocks

Following the graduations of Stephen and Mark, Christa Brelsford (SEAS '07), Emily Laskin (BC '07), and Ethan Coon (Ph.D SEAS '09) took over all aspects of the Rock Climbing Club, most importantly, maintaining the club's status as "totally sweet". Emily reigned supreme for the '06/'07 season -- the first with legit club funding.

Christa, Ethan, and a group of fresh, new faces took over the club for the '07/'08 season. After being smote down by club sports for being graduate students, Christa and Ethan stepped aside to advisory roles, leaving the keys with Stephanie Quan (CC '08) and an expanded executive board.

The club further expanded its membership under Steven Thomas (SEAS '09) and Nicolas Borensztein (SEAS '10) and vastly increased its funding. With this cunning new leadership the club was able to begin making its outings far more accessible by covering all costs related to competition or park entry fees and rental vans. The members rejoiced.

The club starts the new year afresh, with many of last year's executive board running the ship. Since its inception, the club has grown to over 100 members strong, and is in the process of expanding its offerings to more events for more climbers. The past few years we've grown from a weekly gym trip to multiple outdoor trips and an active competition team in regional bouldering comps. Thanks to Club Sports and the efforts of students everywhere, the club has grown to be a force in the rock climbing community of New York City.

The club is proud to announce its executive board for the 2011-2012 season:

Historically, the rock climbing club has met every Saturday at noon in front of 212 Lerner Hall. Saturday is generally when new members and interested students travel with club officers to the climbing gym. All skill levels are welcome to participate. The club offers belay instruction as well as assistance with climbing technique.

For those seeking freedom from the confines of a climbing gym, there are many outdoor options available to you. New York City has a tremendous amount of bouldering available (legal!) in Central Park, the majority being midtown and towards the north entrance. For the more adventurous, the Shawangunk Ridge ("The Gunks") is within a reasonable driving distance and features some of the best climbing in the United States. 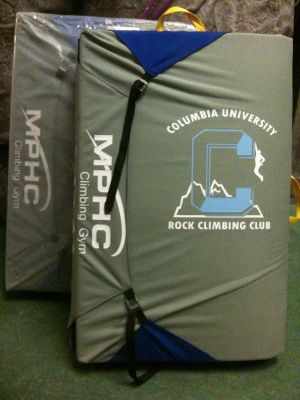 The club now owns its own rack used for club outdoor trips. Additionally, thanks to a generous sponsorship by the Manhattan Plaza Health Club, the club also has its own crash pads. Those interested in borrowing one or both of these crashpads should contact the club president. The club earned this sponsorship by placing the MPHC logo on the sweet club tee-shirts.

The club runs about four trips a year to the Gunks, taking about 12 students per trip (as vans/drivers, guides, and gear permits). Most of these trips are available on an Animal Farm basis... all climbers are equal, but some climbers (such as those with gear, guiding ability, and club sport's ok to drive) are more equal than others. We do make a concerted effort to get anyone who climbs in the gym actively with the club regularly a spot on outdoor trips as well. Ability is almost never a requirement, but being active in the club often is.

As the club has grown, local and regional bouldering competitions have been a big part of our activities. The club now has an impressive number of top finishes at American Bouldering Series (ABS) competitions, with more than a few Champion titles in both the Men's and Women's categories. Regular competitions include Midnight Burn (Philly Rock Gym), Cliffs at Valhalla competitions, and those at our home gym, Manhattan Plaza Health Club. Lately our women have been especially strong, medaling in all three amateur categories.

As competitive bouldering has multiple divisions, people of all abilities are welcome and encouraged to compete. The atmosphere of a climbing competition is incredibly supportive, and a ton of fun. See Erica for more.

The Rock Climbing Club has informally made its home at the midtown Manhattan Plaza Health Club. This gym features two rooms, one devoted exclusively to bouldering. The club also has a special deal with the gym, whereby students with the club get special rates for the school year. These memberships are bought at the beginning of the school year in bulk, and may not be purchased at any other time. Information regarding these memberships will be distributed via the club mailing list.

Members seeking new scenery have many other rock climbing choices available to them within New York City, as well as within the tri-state area.

There isn't a ton of gear shops accessible to those without cars, but there are a few options.

>> EMS is on Broadway near Prince (just north of the N/R/W station).

>> MPHC often has lightly-used shoes for sale cheap by previous owners. This can be a great way to get started.

>> Tents and Trails on 21 Park Pl has a small selection of climbing gear.