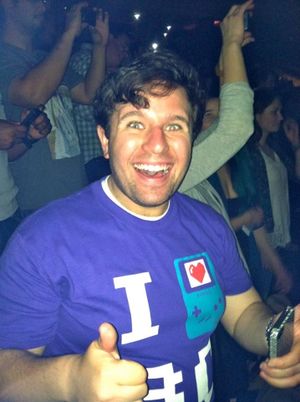 The photo Fine submitted for his Bwog Senior Wisdom[1]

David Fine CC '13 was the chair of the Student Governing Board. He majored in History.

He was the editor in chief of The Current and was also a sports columnist and staff writer for the Spectator.

Under David's chairmanship the SGB voted not to comply with the Barnard flier policy because of concerns that it stymied freedom of speech for SGB groups. “I think that the policy was enacted hastily and that it unnecessarily imposes a burden on student speech on campus, and that’s what we find unacceptable,” David told the Spectator. [2]

The SGB also released a statement in support of Faculty House workers during a labor dispute in 2013. In the statement, the SGB discouraged its members from using Faculty House until the dispute was settled. They also stated that SGB events would not use Faculty House as a venue. [3]

In September 2011, David Fine, along with Eric Shapiro and Jake Snider organized a protest against a reported dinner between students of CIRCA and Iranian president Mahmoud Ahmadinejad. [4]