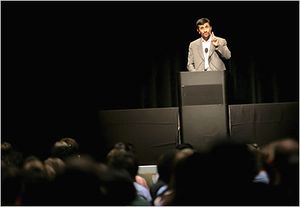 Mahmoud Ahmadinejad is the current President of Iran. Invitations for him to speak at the university during the annual autumn World Leaders Forum ignited controversy in both 2006 and 2007; a private dinner invitation the president extended to Columbia groups renewed the uproar in 2011.

In 2006, Ahmadinejad's invitation was revoked after apparent confusion at the highest levels of the Columbia administration, between then-SIPA Dean Lisa Anderson and President Lee Bollinger. The administration later claimed that logistical concerns resulted in the 2006 speech's cancellation. However, Ahmadinejad was invited back in 2007, through diplomatic back-channels facilitated by history professor Richard Bulliet. Ahmadinejad's speech took place on Monday, September 24, 2007.

Columbia's invitation to Ahmadinejad prompted a large number of alumni to begin letter writing and email campaigns to President Bollinger, threatening to cease donations and cut ties with the university if the invitation was not revoked.

The first invitation extended to Ahmadinejad provoked a great deal of criticism as well as praise. The second was even more controversial, as everyone had already rehearsed their arguments and were ready to shout. Protests and condemnations of Columbia in the media began days before the event. The Spectator ramped up its coverage with an "Ahmadineblog".[1] Fox News' Geraldo Rivera made a special visit to campus,[2] and many members of the Columbia community were interviewed, including SIPA dean John Coatsworth and College Republicans head Chris Kulawik. Coatsworth's appearance became controversial in itself when the dean claimed that Columbia would have also invited Adolf Hitler to speak.

The runup to the appearance did lead to the release of a Columbia architecture school alum, Kian Tajbakhsh, who was imprisoned in Iran. PrezBo had planned to question Ahmadinejad about his holding, but Iran released the Columbian preemptively. 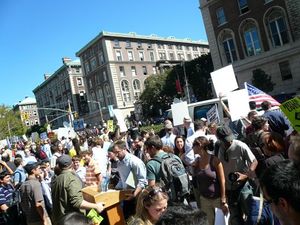 Protesters on Broadway during Ahmadinejad's speech

On the day of the actual speech, thousands of students protested on the Low Steps or watched the video simulcast on South Lawn, classes were cancelled by the dozens. Protesters lined Broadway. The appearance opened with a castigation by Bollinger, who accused Ahmadinejad of being a "petty and cruel dictator". Ahmadinejad retorted that this was an "insult". Later, many Columbia students were found to have been put off by Bollinger's opening remarks as well.[3] He went on to give his own address and take questions from the audience. Among his more controversial remarks was the assertion that there was no homosexuality in Iran, which drew jeers and laughter from the audience.

The speech lacked the characteristic Columbia and World Leaders Forum branding that typically characterizes such events, perhaps because the university feared the potential such a visual connection between itself and Ahmadinejad might have.

It received widespread attention in the mainstream media. Overflow from Roone Arledge Auditorium forced Columbia to make many journalists watch a simulcast of the event from the Journalism School. The New York Times filled its website's front page with coverage of the event for the entirety of the day, even liveblogging the speech.

Guess who's coming to dinner?

Apparently undeterred by his reception in 2007, Ahmedinejad's handlers have reportedly been in contact with members of Columbia's CIRCA society, and may arrange to dine in Midtown during the Fall 2011 General Assembly meeting, stirring new controversy. Members of CIRCA were apparently "enthusiastic" about the opportunity.[4]

After numerous groups had expressed their opposition to the dinner, the invitation was lambasted on Fox News, and some even threatened legal action against the university, CIRCA's president announced that its invitation to diner with Ahmadinejad had been dropped, in favor of another, unspecified Columbia group.[5]