From WikiCU
(Redirected from Dwight Eisenhower)
Jump to: navigation, search 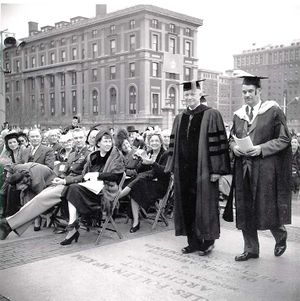 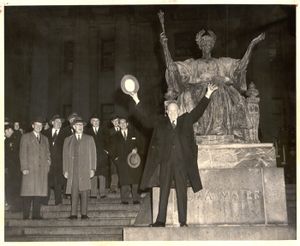 Ike in front of Alma Mater

Dwight D. "Ike" Eisenhower was president of Columbia from 1948 until becoming US President in 1953.

He was mostly in absentia during his tenure, dealing with such important matters as the Korean War, being Supreme Commander of NATO, and running for President of the United States, but he did manage to turn the stretch of 116th Street running through campus into the mostly traffic-free College Walk.

Less successfully, he proposed a "Citizenship Center," including military recruitment offices and a rifle range (which was built in the basement of now-demolished student center Ferris Booth Hall, and which hosted the now-defunct Columbia University Rifle Team).

Once, it was rumored that SIPA would be named after him.