The term "losing streak" is a bit of a misnomer, since the team didn't actually lose every game, the streak included ties as well, though the phrase "famous not winning streak" never really caught on. 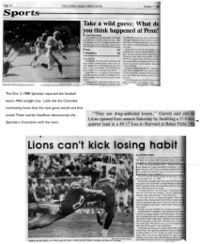 Spectator article covering the last game of the losing streak

The streak began with a tie game to Bucknell in the 6th game of its 1983 season, followed by a loss to Holy Cross, and a tie with Dartmouth.[1] After their 35th loss, they set the record for the longest Division I losing streak in history (beating Northwestern's 34 game losing streak from 1979-1982).[1] After this game, Larry McElreavy, the then coach of the team said in an interview with The New York Times, "I'm realistic; there's not a lot of talent here." To be fair though, the team didn't just lose - they lost in some of the most odd, unbelievable, and heartbreaking ways imaginable along the way, blowing leads and suffering clock-expiring defeats. ESPN rated the 1983-1988 Lions team at 4th in its list of the top 10 worst college football teams of all time.[2] At the time, Tom Brokaw called Columbia "one of the worst pushovers in college football history".

The Lions finally broke the streak on Saturday October 8th, 1988 with a 16-13 victory over Princeton in the fourth game of the season. The victory came after Princeton kicker Chris Lutz failed a 48-yard field goal in the last seconds of the game, which would have put the game into overtime. Humiliated at being the first team to lose to such an awful team, Princeton coach Steve Tosches said after the game "This is really what you dread...".[1] Professor George Saliba still exhorts student-athletes in his classes to "beat Princeton" in particular because of their classless reaction to the outcome of the streak-breaking game. Class day speaker extraordinaire Matthew Fox, a senior at the time, did his part in the game by catching a 40-yard touchdown, which was ruled out of bounds and scored no points.[3] After the victory, more than 5,000 fans and the players rushed onto the field in celebration, in the process tearing down both goal posts (one of which the marching band, claims to have stolen and kept).[1] The Spectator named the game one of the four best games in Columbia history.[4] The win sent the campus into a 2 day celebratory partying frenzy, setting Columbia's record for most consecutive days spent partying at solid 2.

In 2010, filmmaker Marty Huberman announced plans to make a documentary about the end of the losing streak called The Streak Starts Now, in reference to one player's response to ending the losing streak: "what streak? The streak starts now."[5][6]