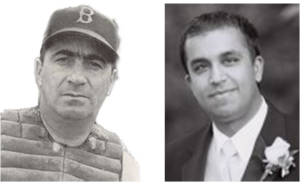 Moe Berg Law '30, is perhaps the most interesting personality to ever have stepped onto Columbia campus.

Moe Berg was a Major League Baseball catcher from 1923 to 1939. In his career he played for the Brooklyn Dodgers, the Chicago White Sox, Cleveland Indians, the Washington Senators, and the Boston Red Sox. Possessing sound baseball instincts and defensive abilities, he rubbed shoulders with many famous players, including Casey Stengel and Ted Williams.

Later, during World War II he served with the OSS (a government organization which would eventually morph into the CIA), parachuting into Nazi Europe to aid and assess resistance groups there. In the last years of the war, he rendezvoused with several German scientists to attempt to persuade them to defect to the United States and contribute to the Manhattan Project.

He also spent several months in Japan to take photographs and videos. These would be used to plan the Doolittle Raid.

He studied at Columbia Law School while simultaneously playing professional baseball. An undergraduate alumnus of Princeton University, he regularly read 10 newspapers everyday. He was also multilingual; it was said of him "he could speak eight languages, and couldn't hit in any of them."

His biography, authored by Nicholas Dawidoff, is entitled The Catcher was a Spy.