Nadia Abu El-Haj is an associate professor of Anthropology at Barnard College.

"Professor Abu El-Haj’s work examines the relationship between scientific knowledge and the making of social imaginations and political orders. Her first book examined the practice of archaeology—a historical science—and sought to specify the ways in which it generated facts and to understand how those facts circulated in wider social worlds, helping to fashion the cultural understandings, political possibilities and “common-sense” assumptions. Abu El-Haj’s more recent scholarship explores the field of genetic anthropology by analyzing, first, projects that seek to reconstruct the origins and migrations of specific populations and second, the participation of for-profit corporations that offer genetic ancestry testing. The intersection of race, diaspora, and kinship figures prominently in this study, where genetic origins emerge as a shared concern among those who may seek redress or recognition." [1]

Facts on the Ground controversy 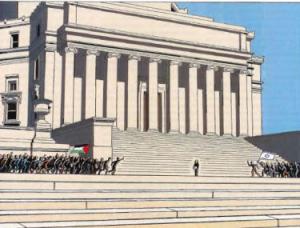 A New Yorker caricature of the Abu El-Haj tenure battle

In Fall 2001, Prof. El-Haj published Facts on the Ground: Archaeological Practice and Territorial Self-Fashioning in Israeli Society. It was published by University of Chicago Press.

In the book, Prof. El-Haj discusses the role of scientific knowledge in the Israeli-Palestinian debate. From the UChicago Press site:

"Archaeology in Israel is truly a national obsession, a practice through which national identity—and national rights—have long been asserted. But how and why did archaeology emerge as such a pervasive force there? How can the practices of archaeology help answer those questions? In this stirring book, Nadia Abu El-Haj addresses these questions and specifies for the first time the relationship between national ideology, colonial settlement, and the production of historical knowledge. She analyzes particular instances of history, artifacts, and landscapes in the making to show how archaeology helped not only to legitimize cultural and political visions but, far more powerfully, to reshape them. Moreover, she places Israeli archaeology in the context of the broader discipline to determine what unites the field across its disparate local traditions and locations."

Critics claim El-Haj undermines the Zionist movement by questioning the basis of a Israeli state before the modern-termed Palestinian people.

This quote comes from NadiaAbuElHaj.com, a website domain name taken by a group of concerned Barnard/Columbia alumni wishing to "deny tenure, and restore honor to Barnard, or to further the shame by supporting an ill-conceived and poorly researched decision, and thus lower the standards that have always been a trademark of our alma mater". [2]

More recently, a representative of the Teacher's College Jewish Association claimed that there is a link between El-Haj's work and anti-Semitic graffiti found on the Columbia campus.