From WikiCU
(Redirected from Pillow fight)
Jump to: navigation, search 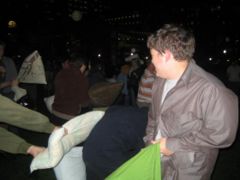 The Spring Pillow Fight is an annual event that takes place each spring at midnight on the last Sunday (between Sunday and Monday) of the spring semester, after the first Friday of exams and before the last week of Finals. Students tired of studying are encouraged to bring their pillows with them to the Sundial, whence they move to South Lawn and begin waling on each other with them at the first sounds of Primal Scream, which occurs concurrently with the fight.

The first pillow fight was organized in 2006 by Nina Bell CC '07, and has since been organized by students on an annual basis. The Bwog often covers the event and posts pictures.

In 2008, the pillow fighters split up into north vs. south lawn. In 2010, the fight was organized around competing teams from early on - Team Butler v. Team Sundial, referencing the orientation of teams on the lawn with respect to those campus landmarks.[1][2]