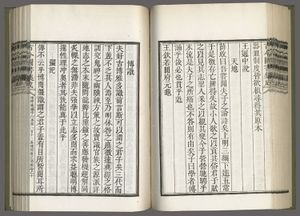 The Qingding Gujin Tushu Jicheng (traditional Chinese: 清定古今圖書集成; simplified Chinese: 清定古今图书集成; pinyin: Qīngdìng Gǔjīn Túshū Jíchéng; literally: "Complete Collection of Illustrations and Writings from the Earliest to Current Times, as Designated by the Qing Dynasty") is a vast encyclopedia commissioned by the Emperor Kangxi and completed during the reign of his son Yongzheng in 1725. The two lead editors were Chen Menglei (陳夢雷) (1651-1741) and Jiang Tingxi (蔣廷錫) (1669-1732).

It contains 800,000 pages and over 100 million Chinese characters spanning 10,000 silk rolls. It completely pwn3d its closest predecessor, the Yongle Encyclopedia, which contained a paltry 50 million Chinese characters. Unfortunately, 50 years later, it was pwn3d again, this time by Qianlong, Yongzheng's son, who commissioned the Siku Quanshu in 1773 and saw it completed in 1782. The Siku Quanshu was a work approaching absurdity: it took 3,826 copyists 9 years to transcribe the 3,461 books into 36,381 volumes with 79,000 chapters, comprising 2.3 million pages, and 800 million characters.

The first printing was of 60 copies; the second of 250. It is divided into thirty-two classes or sections of various length, grouped under six main categories approximately representing Heaven, Earth, Man, Science, Literature, and Government. Like the Yongle Encyclopedia, none of the content is original; rather, both text and illustrations were compiled and copied from earlier works.

In 1902 Seth Low solicited for Columbia University's East Asian Library a gift of books through the American ambassador in Peking, Edwin H. Conger, but didn't quite expect the alternately stingy and extravagant but mostly unpredictable Dowager Empress Cixi to donate the bloody entirety of the Gujin Tushu Jicheng. It is today, one of three copies located outside of China.

Unfortunately, the books arrived in the form of 5,044 silk scrolls, and the first Dean Lung Professor of Chinese, Frederick Hirth, who was far better-intentioned than wise in the ways of lexicographical presentation and preservation, ordered the scrolls rebound Western-style into 1,672 books.

One can see selections of the Gujin Tushu Jicheng in the Rare Book and Special Collections Reading Room in the Starr East Asian Library.