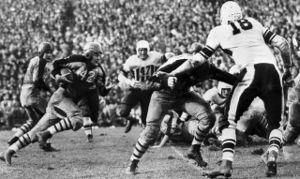 Luckman (#42) in action against Colgate University

Sidney "Sid" Luckman CC'39 is the only Columbia alumnus to be member of both the College Hall of Fame and the NFL Hall of Fame.

Luckman was born in Brooklyn. His parents were Jewish-German immigrants.

His high school football performances were so impressive that he was scouted and sought by over 40 colleges. He chose Columbia University after meeting with head coach Lou Little at Baker Field after a Columbia/Navy game. Luckman's choice to attend Columbia is somewhat surprising, since Columbia never offered him a scholarship. Instead, the University provided him with means of employment, so that he could pay his own way through. Consequently, Luckman spent much time in his college years dish-washing, baby-sitting, and message-delivering.

Luckman's football skills shone, despite mediocre Columbia performances while he was there. He did not play his freshmen year in order to focus on his studies, but was the starter for his sophomore year in 1936. As quarterback, he completed an impressive 46% of his passes as the Lions went 5-3 that year. In his junior year the team went 2-7-2, but he completed 47% of his passes (83 of 173 for 1065 yards and 8 touchdowns). In his senior year, when the team went 3-6, he completed 50% of passes (66 of 132 for 856 yards and 6 touchdowns).

All the while, he punted, placekicked, and played brilliant defense.

Luckman was extensively scouted by George Halas, Chicago Bears owner and coach, after hearing about his exploits as a single-wing tailback. Selected 2nd overall in the 1939 professional draft by the Pittsburgh Steelers, Halas traded for him immediately - only to find out that Luckman intended to abandon football and work in his father's trucking business. It took a combination culinary bribery (Halas' wife cooked dinner) and a $5,500 contract to get Luckman into pro football uniform. He would go on to have a brilliant career, with a 51% passing percentage for 14,686 yards, 137 touchdowns and 134 interceptions. His 8.4 yards per attempt is second-best in NFL history, and his career touchdown rate of 7.9% is easily the best.

Luckman was a pioneer in offensive football strategy, and a founding father of the modern game. His versatility and game-sense enabled the Bears to implement the T-formation to its full potential. With this strategy, the Bears would dominate the football landscape for many years. His legacy went far beyond the Bears, however; virtually all modern offensive formations are some variation of the T-formation shape.