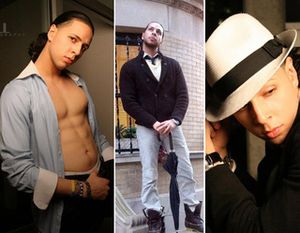 Stephan Vincenzo, aka Jose Perez, aka Stephan Perez, was a member of the Columbia College Class of 2012, until he was expelled for his part in Operation Ivy League, the 2010 drug bust. 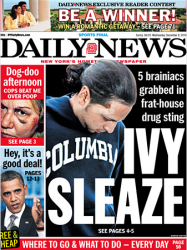 Vincenzo on the cover of the New York Daily News

Before he even arrived on campus, Vincenzo made waves. In the summer of 2008, he made a Facebook event for a party in his Carman double, and invited the entire school. He wrote, "we r throwin da sickest party to get the year started rite…. Carman the sexyest dorm house ever…. we’re goin show these other dorms who runs shit…"[1]. He then relocated the party to a bar without alcohol[2].

During his time at Columbia, Vincenzo was a Gates Millenium scholar and brother of Pi Kappa Alpha. In the 2010-2011 academic year, he lived in Pike's former brownstone, and was known to do his laundry with his brothers in Carman Hall. Vincenzo was also known for his ostentatious style of dress, his abdominal muscles, and being a "player"[3].

His magnetism of personality quickly earned him a Campus Character profile in The Blue and White as well as a mention in the 115th Annual Varsity Show as "Vincent Stephanzo"[4].

After Operation Ivy League, Stephan became the central figure of the Columbia 5, possibly because he had the bad fortune to be wearing a Columbia hoodie when he was arrested, which landed him on the cover of the New York Daily News. (According to Chris Coles, the NYPD put it on him when he asked for a jacket[5].) He received a lot of media attention; Gawker notably posted a cruel article about him[6].

After his arrest, he plead guilty to "selling a prescription stimulant" (Adderall)[7].

After his time at Columbia

Vincenzo contritely talked about the dangers of Adderall with NBC's Brian Williams and on Fox 5 NY[8][9].

He graduated from Emory Univerity in 2013.