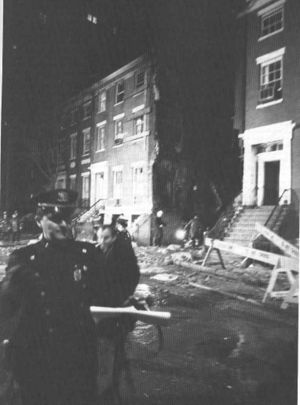 Aftermath of the Weathermen's townhouse explosion

The Weathermen was a radical left-wing group that emerged from the 1968 protests. The name was inspired by a line from the song Subterranean Homesick Blues by Bob Dylan that went “You don’t need a weatherman to know which way the wind blows”. On March 6, 1970, during preparations to blow up Fort Dix [1], wound up blowing up themselves (and their Greenwich Village townhouse) instead.