College Bowl, or the College Quiz Bowl, was launched as a program on the NBC Radio Network in 1953, and would air for just over 2 seasons. Shows were taped across multiple sites; host and "Master of the Quiz" Allen Ludden read questions from NBC's Radio City Studios at Rockefeller Center, with each school's team of four students located on their respective campus with an audience of their classmates and a studio "referee" who signaled back to Ludden when a team member was 'ringing in.' Ludden read "toss-up" questions from his studio, and the first team to signal and correctly answer received 10 points and a follow-up bonus question. Winning schools returned on the following episode as 'reigning champions' until defeated. During the radio era of the show winning teams did not "retire" after a certain number of episodes, resulting in some epic runs by individual schools.

Over the course of the first season, the program began developing characteristics that are easily recognizable in quiz shows (and Quiz Bowl tournaments) today. In the early broadcasts of the program, students would 'ring in' by raising their hands and the studio referee would call out the school name. Later on actual buzzers were added, though only as a sound effect - students still had to raise their hands to signal, and the studio referee rang a buzzer, and a "neg five" penalty was introduced for incorrect answers.

The show picked up Good Housekeeping magazine as a sponsor in its second season. However, the magazine pulled its sponsorship after two episodes of the third season aired, and the show ended after shortened season in December 1955.

The winning team each week received a $500 prize for their school, while members of the losing team received a watch from Longines Wittnauer.

Columbia holds the distinction of having participated in the very first College Bowl episode broadcast on October 10, 1953, a game pitting four Columbia College students against four students from Northwestern University. Columbia was represented by Joe Wishy '55 of Plymouth, MA, Bill Scales '54 of Shreveport, LA, Bill May '54 of Milwaukee, WI, and Howard Falberg '54 of New York, NY. Episodes of the program were initially taped in-studio rather than on-campus, so the Columbia participants played out of the WNBC studios, while their opponents responded from WMAQ in Chicago, IL.

Although Howard Falberg gave the first correct answer to a toss-up in College Bowl history (correctly identifying John Hay as the Secretary of State responsible for the "Open Door" policy with China), Columbia went on to lose to Northwestern, 135-60.

The episode is remarkable for its distinctly by-the-seat-of-their-pants feel, and it is clear that Ludden, the referees, and the participants are winging it, as they talk over each other, deal with a near-simultaneous buzz-in, replace accidentally spoiled questions, and handle other issues on the fly.

Columbia would make a return appearance on the program during its second season on episode #47, broadcast on March 12, 1955. By this time the show had moved to on-campus recording and the Columbia team's appearance was recorded from Casa Italiana. Tom Evans ’55 of Cincinnati, OH, Milburn Smith ’56 of Fort Plain, NY, Sheldon Wolf ’55 of Brooklyn, NY and Gerry Pomper ’55 of New York, NY, never had a chance though, trailing opponents Colgate 170-30 at halftime, before finally succumbing 310-100.

Barnard College made its first appearance on the show in episode #23 on March 14, 1954. The Barnard team made their appearance from the Brooks Hall living room, along with an audience of approximately 100 of their classmates. Four seniors, Rael Isaacs '54 of New York City, Barbara Kauder '54 of Summerville, NJ, Margherita Valguarnera de Niscemi '54 of Philadelphia, PA by way of Palermo, Sicily, and Geraldine Kirshenbaum '54 of Brooklyn, NY took on the reigning champions Washington and Lee University. Trailing by only 20 points at halftime, the team fell short in the end, losing 190-165.

Barnard returned only 5 shows later at the beginning of the second season of the show, taking on Syracuse University (who had unseated Washington and Lee) on October 30, 1954. Appearing once again from the Brooks Hall living room, Annette Wilbois '55 of Des Moines, IA, Tobia Brown '55 of Brooklyn, NY, Donna Click '55 of Cincinnati, OH, and Judith Lewittes '54 of the Bronx, NY took a 125-110 lead into halftime. But the team eventually fell to Syracuse by a final score of 205-175. Following the loss, the teammates penned a humorous apology to their classmates in the Barnard Bulletin, writing "It is the opinion of the Varsity Scholars that the Barnard curriculum is sadly lacking in instruction in nonsense, current popular tunes, corrupt politicians, orchestral economists, and famous but obscure facts... We were sorry we could not sail the seven sisters to victory. It's not that we were lion down on the job, we just couldn't bear to win," and signing off "Clotho, Atropos, Lachesis, and Piglet". 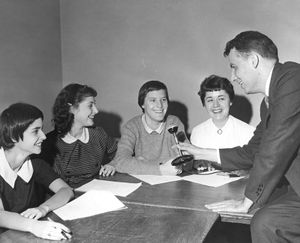 After a four year hiatus, the College Bowl was revived as a television program on CBS as the GE College Bowl, sponsored by General Electric. The re-launch of the show came after the game show genre had been rocked by a series of game-rigging scandals, including most famously one involving Columbia professor Charles Van Doren, son of legendary Professor Mark Van Doren (later dramatized in the film Quiz Show).

The new show once again featured teams of four college students, but now traveled from school to school, with the 'reigning champions' hosting challengers in a campus showdown. Teams who won five matches in a row were crowned 'champions', awarded a 'College Bowl' trophy, and retired from the show. Teams also earned $1,500 in scholarship money for their schools for each match won.

The show initially aired on CBS and featured Allen Ludden as host once more. After 1962 the show moved to NBC, with Robert Earle succeeding Ludden, who had moved on to host the game show Password.

In a reprise of the very first College Bowl radio broadcast, Columbia again faced off against Northwestern in episode #2 of the new television program which aired on January 11, 1959. Columbia College students Ira Jolles ’59, Alexander Liebowitz ’61, Bruce Shoulson ’61, and David Looman ’62 went on to repeat history, losing to Northwestern again, though by a more respectable margin of 165-130.

Barnard College was invited on to the show for episode #9, to face off against Notre Dame in South Bend, Indiana. The Notre Dame team was coming off of a victory against Georgetown University, during which future fantasy and gothic mystery novelist John Bellairs earned notoriety for launching into a Middle English recitation of Chaucer in response to a bonus question about the Canterbury Tales. The team of Heritage "Cherry" White ’59, Susan Rennie ’61, Phyllis Hurwitz ’61, and Ellen Willis ’62 were coached by Professor of English Richard Norman, and eager to out-do their counterparts across the street at Columbia. Rennie, a native of South Africa who had participated in game shows in her native country was quoted in an interview saying "It's our absolute ambition to win this match because Columbia lost their first time out."

Barnard defeated Notre Dame 230-110 on an episode that aired on March 15, 1959. Years later a member of the Notre Dame remembered one particularly dominant Barnard player, possibly Phyllis Hurwitz, recalling "I don't remember her name, but, single-handedly, she could have beaten the entire Notre Dame team that day."

The team was met at Grand Central Terminal by a welcoming committee of classmates, and by a cheering crowd of their classmates and members of the Marching Band on their arrival back on campus. The two weeks later the team hosted and defeated the University of Southern California at Minor Latham Playhouse in episode #10 which aired on March 29, 1959, subduing their west coast guests 195-65 (having blitzed their opponents to a 140-0 lead). After their second win, the team earned a place in the Barnard Bulletin's April Fools issue, which claimed the players were awarded individual scholarships (and a waiver of hefty senior activity fees in the case of senior Cherry White) after having threatened to abscond with the full $1,500 prize from their next win. Unfortunately, the Barnard team fell to the University of Minnesota in a heartbreaker, 220-210, two weeks later in episode #11. 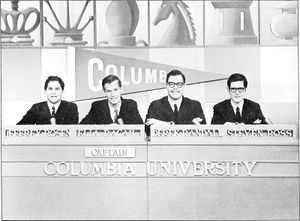 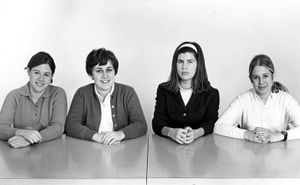 The GE College Bowl eventually shifted to NBC and took on a new host, Robert Earle. After the network switch Columbia made its second appearance on the television show during the 1966-1967 season.

Captained by Elia Racah ’67, the 1966 Columbia team included Derek Randal ’67, Jeffrey Rosen ’68, and Steven Ross ’68. The team was coached by Assistant Dean Mark Flanigan, who quipped to the Columbia Spectator "I am the only coach on campus with an undefeated, untied, and unscored on team." Assistant coach Katharine Koch called "really offensive", hopefully referring to their scoring prowess. Dean Flanigan's boast proved prophetic as the 66-67 team went on to demolish Providence College (300-205), Indiana University (250-145), Michigan State University (320-150), the College of William and Mary (330-60), and Smith College (345-120) between November 6 and December 18, 1966. When the smoke settled the 5-time-champions retired from the show with $10,500 in scholarships for the school, a silver trophy for the team, and a champagne party given in their honor by Columbia College Dean David Truman. Reflecting on those games years later, show creator Don Reid recalled that "the Columbia series was one of the biggest slaughters in the College Bowl."

Not to be outdone, Barnard College appeared on the show during the following season, and matched their peers' performance. Debbie Weissman '70 and teammates Maggie Rosenblum '68, Rachel Val Cohen '70, and Connie Casey '69, coached once more by Professor Richard Norman along with Jeffrey Rosen and Steven Ross from the Columbia championship team (who were still on campus as seniors), first stopped Bryn Mawr from completing a 5 game winning streak 205-175, and then went on to complete its own, defeating in turn Niagara University (240-165), Ohio State (295-145), Jackson College/Tufts University (225-160), and the University of Washington (175-160). They too took home the 'College Bowl' trophy, $10,500 in scholarship grants for Barnard, and were feted by college President Martha Peterson.

The Barnard Bulletin article reporting on the 67-68 team's ultimate victory claimed that the team would play one final match at 4 pm on January 14, 1968 in Columbia's Wollman Auditorium - against Columbia's championship team from the previous season in a 'Battle of the Sexes' Super Bowl, with Derek Randal and Elia Racah travelling to New York from their respective graduate schools to participate. However neither the Bulletin nor the Spectator reported on the outcome of the match, leaving in doubt whether the tantalizing match-up ever occurred.

The current whereabouts of the two 'College Bowl' trophies are unknown. The Columbia trophy was reported to be in the possession of Fran Matsuo, then the assistant to the director of Ferris Booth Hall, in the Spring/Summer 1987 issue of Columbia College Today. Ms. Matsuo has since retired, FBH has since been demolished, and the trophy's whereabouts are unknown.

The College Bowl Company appears to have ultimately settled into producing questions and organizing on-campus intramural and intercollegiate tournaments around the country, in addition to licensing a number offshoots of the format.

However, students at many schools grew tired of College Bowl's centralized hegemony and poorly formatted questions, leading to a wave of "de-affilation" in the 1990s and the formation of a number of competing question writing/tournament organizing organizations, such as the Academic Competition Federation (ACF) and National Academic Quiz Tournaments (NAQT). The Quiz Bowl team at Columbia today travels to and participates in a number tournaments organized by these and other groups around the northeast and mid-Atlantic.

In June 2008, the College Bowl Company announced that it was "suspending the College Bowl campus program, effective immediately. College Bowl will no longer produce question packets for campus, regional, and national competitions." While the original College Bowl may have met its ultimate demise in 2008, the legacy of the concept originally launched in 1953 is carried on by NAQT, ACF, and independent tournament organizers and question writers.