Funding at Columbia University (F@CU) is an event that occurs each spring in which the student activitiy fee portion of Student Life Fees collected by the university are divided amongst the five governing boards at Columbia. The name of the meeting is pronounced 'fack-yoo'.

Every year, each undergraduate student pays roughly $1,000 in student life fees. After the administration removes the money it needs to operate various departments (such as Dodge Fitness Center), the remaining fees are given to the four student councils, and they in turn divide the money between the five governing boards according to applications submitted by each board, after removing their own operating costs from the pool.

In 2012 Spec got Kevin Shollenberger to release the student life fee spending breakdown. Unsurprisingly, a lot goes to Athletics, and "making admission to sporting events free." Which means that every ticket is paid for in full, from softball to baseball to basketball to archery [1][2].

In 2013 the newly-founded Governing Board at Barnard received funding through F@CU. 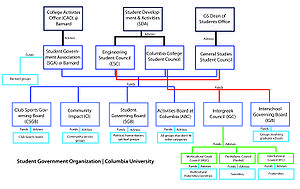 The meeting is notoriously long, sometimes lasting eight or more hours. The incoming and outgoing president and treasurer of each student council attends the meeting as a voting member, totaling sixteen participants (four per council). These sixteen students decide the division of the roughly $800,000 in student life fees remaining in the funding pool after initial allocations to the individual councils and the administration.

Each governing board presents their budget request to the committee and after deliberations, a final amount for that board is decided and voted upon. The amount given to each board is divided in ratio between the councils according to their undergraduate population. The notable exception to this rule is the Intergreek Council, which is not funded by Barnard, since Barnard College as an institution does not recognize Greek life.

The meeting is open to the undergraduate student body.

In 2019, F@CU went through a reorganization to align itself with the school's finance cycles. It was notably moved to two days before Fall semester starts. The meeting now lasts one to two days, with the incoming president and treasurer of each student council, as well as two representatives from each governing board. The councils work together to allocate the student life fees to the six governing boards: ABC, SGB, IGC, CSGB, CI, and GBB.