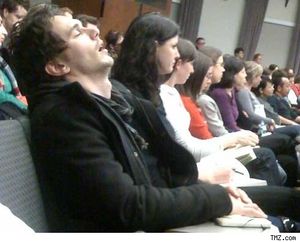 Franco, unimpressed by a Columbia lecture

James Franco SoA, movie star, enrolled in Columbia's School of the Arts in Fall 2008 to get an MFA in Creative Writing. He was simultaneously enrolled at NYU's Tisch School of the Arts. Cell phone pictures of him sleeping during a Columbia lecture soon popped up on the web[1]. He also reported that he was hounded out of Butler Library, where he had enjoyed studying in Blue Java and Room 209, because of suspicion he was there to hit on girls[2].

Whether or not he completed his MFA, Franco is apparently moving on to do a PhD at Yale. He will also play Allen Ginsberg CC'48 in some sort of movie.