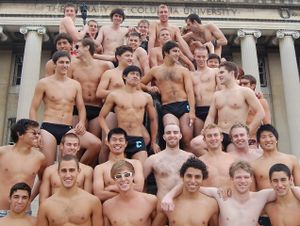 The season officially begins in October and ends in early March, although technically all college swim seasons extend until the NCAA Championships regardless of whether they have entrants.

The Columbia Lions train in Uris Pool on the first floor of the Marcellus Hartley Dodge Physical Fitness Center. Information about the team can be found at Columbia University athletics website.

Since 2007, the Men's Swim team has had a strong connection to the Tug McGraw Foundation. The foundation has a team run in the New York City Marathon, and each fall the swim team will disperse in small groups across the five boroughs with signs and bright shirts to cheer on the foundation's runners. This time commitment is also usually coupled with a donation. Starting in Spring 2010, the Foundation will be participating in the Half Marathon and the Swim Team will be there again.

The Columbia Lions tend to finish the season well. Their dual meet record is often a poor indicator of their end-of-season performance. Columbia enjoys healthy competition with most of the Ivy League, often just shy of league powerhouses Princeton and Harvard, and in close battles with Yale and Cornell. In 2009 Columbia finished 5th in the Ivy League; 2008 - 4th, 2007 - 4th, 2006 - 3rd.

Juniors in High School are encouraged to visit or contact the head coach. Find out more about the team at the Columbia Athletics Website, gocolumbialions.com. For potential recruits, find the recruiting page.

Recruiting trips occur on weekends throughout the fall, during which high school seniors stay with current college swimmers and get to experience college life and collegiate athletics.

The Athletic Department encourages prospective students to consider Early Decision, which must be filed earlier than regular decision. These applications are favorably judged because applicants express their true desire to attend Columbia University exclusively. For those uncomfortable with this commitment, admission through regular decision is still possible, and in fact more common.