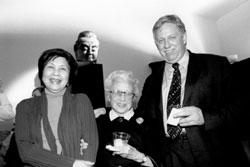 Miss Kai joined Columbia in 1945 and officially retired in 1983. To mark her almost four decades of service, a cherry tree was planted in her honor outside Kent Hall[1]. Despite being officially retired since then, she maintained an active schedule, driving to campus five days a week (being the first to open the office in the mornings), assisting visiting scholars with research, and writing a comprehensive book on history of the East Asian collection at Columbia University.

She has a penchant for kidnapping young Columbia College men (who are usually stopping in for Professor de Bary's office hours) and taking them out, in small groups, to Faculty House for dinner. She explains that her nonagenarian friends are usually too busy complaining about their bodily aches and pains, and that talking to Columbia students keeps her young and with the times. She will, upon request, happily regale her dinner companions with stories about the end of both World Wars I and II, how she was initially hired at Columbia (for sixty cents an hour), her travels on the Trans-Siberian Railway in the 1930s, her time in a Japanese internment camp during WW II, her encounters with Presidents Butler, Eisenhower, Kirk, Cordier, McGill, Sovern, Rupp, and Bollinger, and her many successful instances where she extricated herself from traffic tickets given by officers mortified to find they had pulled her over.

Miss Kai's drink of choice was a Wild Turkey on the rocks.

Miss Kai has written many elementary textbooks on the Japanese language and was honored with the Order of the Precious Crown, Wisteria, which she initially repeatedly declined, by the Japanese Emperor Akihito in 1995 for her long and continuing service in increasing the public availability of Japanese cultural materials.

Miss Kai passed away peacefully in her sleep on Saturday, December 10, 2011. A few weeks before, during Thanksgiving, she was her normal bubbly, charming, and upbeat self, regaling her guests with humorous stories about how her nonagenarian friends whined and complained too much in trying to keep up with her.