From WikiCU
(Redirected from Bollinger)
Jump to: navigation, search 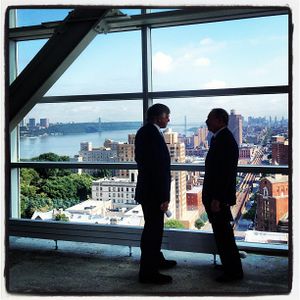 Lee Caroll Bollinger Law '71 is the president of the university. He is affectionately known as PrezBo (alt. spelling Prezbo), a term coined by the Varsity Show.

Bollinger came to Columbia after serving as president of the University of Michigan, where he did now unthinkable things like host house parties for students. Occasionally, though, he will invite students for cotillions at the President's House, where he will deftly avoid providing substantive answers to any of their questions or critiques.

His presidency has been marked by the vague goal of making Columbia a "global university," including the creation of the World Leaders Forum and the Committee on Global Thought.

The massive Manhattanville campus project is another of his brainchilds.

Once, in his spare time, he did something important involving law and affirmative action. Now, he mostly teaches undergrads how to behave like law students, luring them with a class on free speech, where he exercises Socratic Terror to compel debates that are still 1000 times more interesting than anything most actual lawyers do.

PrezBo also promotes physical fitness, inaugurating the 5K Fun Run. The event, which occurs in September every fall, features free t-shirts and is led by PrezBo himself.

He is rarely, if ever, seen walking to and from his official residence at 116th and Morningside Drive. Rumor (though confirmed by many who have actually seen it) has it he is driven the 1.5 blocks from his office in Low Library.

He is recognizable for his wispy hair, trim physique, and vague, tepid statements about everything and everyone except perhaps Mahmoud Ahmadinejad.

Bollinger submitted an op-ed (his first and only submission to a campus publication) In response to a Spectator staff editorial which called for the firing of the Athletic Director, M. Dianne Murphy. This was responded to by CCSC President Daphne Chen, who asked Bollinger to "really speak to us" in a Spectator op-ed.

He loves the word "global" and uses it about five times in each sentence.

Asked by The Daily Beast what book everyone must read before graduating college, Bollinger said, "Montaigne’s Essays. Why? Because they teach you how to learn, how to observe the peculiarities of life, how to be a good friend, how to know and be honest about yourself—and how to spend the last years of your life once you have done your part to make the world a slightly better place."[1] Because it would have been pretty embarrassing if he'd mentioned a book that wasn't part of the Core.

Bollinger's salary was $1.93 million in 2010, which made him the 7th highest-earning college president.

His favorite TV shows are Mad Men, Saturday Night Live, the Wire, and Curb Your Enthusiasm. He has gone hiking in an area densely populated with grizzly bears to test his endurance. He is a fairly interesting man.

Bollinger was born April 30, 1946 in Santa Rosa, CA, the son of Lee and Pat Bollinger. He received a B.S. in intellectual history from the University of Oregon in 1968, where he met his future wife Jean. They moved east to Columbia University where Lee attended law school and Jean received a masters degree in curriculum and teaching from Teachers College [2]. They were married in 1968.