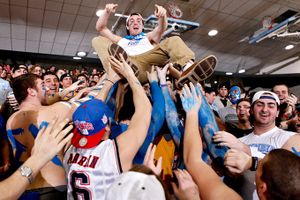 The brothers of Sigma Chi

Sigma Chi (pronounced "kai" not "chee"), Nu Nu chapter, is one of the fraternities recognized by the Interfraternity Council. The fraternity more commonly goes by its nickname Sig Chi.

“A Sigma Chi acknowledges and accepts personal responsibilities to his family, to the communities in which he lives and participates, and to those who are less fortunate. A Sigma Chi voluntarily contributes his time, talents, and resources to help build a better society.”

About Sigma Chi at Columbia

Sigma Chi is primarily composed of football players. They are perhaps Columbia's most "regular university" type fraternity. It "features heavy drinking and girls that want to be seen with fraternity guys."