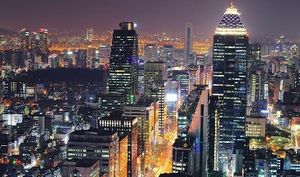 Seoul's metropolitan area is the second largest in the world, with 24.5 million inhabitants. However, it does not contain an Ivy League university.

South Korea is not the happiest place on the world. It has the highest suicide rate, highest plastic surgery rate, and the worst gender gap in the world. Despite its impressive rise from a war-torn third world country to one of the world's top economic powers and its legendary educational system, Koreans are depressed and utterly incapable of critical thinking. Its most famous brand is hell on earth to work for.

Korea has a relatively strong representation at Columbia. Korean international students tend to form circles exclusively amongst themselves; one student who had spent his high school years in America commented that his English speaking skills got worse when he arrived at Columbia, due to his socializing solely with other Koreans.

Students and Alumni from Korea

Koreatown, Manhattan is located on 32nd Street, between 5th and 6th Avenues.